RepeatCuts creates while loops and supervises selected shortcuts when they are running continuously in the foreground.

The following RepeatCuts Pro features can be unlocked for a small purchase with Apple Cash or PayPal:

You can trial these Pro features for seven days before deciding to purchase.

Verify with Shortcut Checksum that you are running a genuine version of RepeatCuts by comparing its SHA-256 checksum.

While Shortcuts offers Repeat with Each and Repeat actions, it does not natively offer a While action. While loops are commonly used in programming as a form of a repeating if-statement. While developers can roll their own solutions using the Run Shortcut and custom shortcuts, RepeatCuts provides a standardized format with powerful controls for creating these loops in shortcuts. 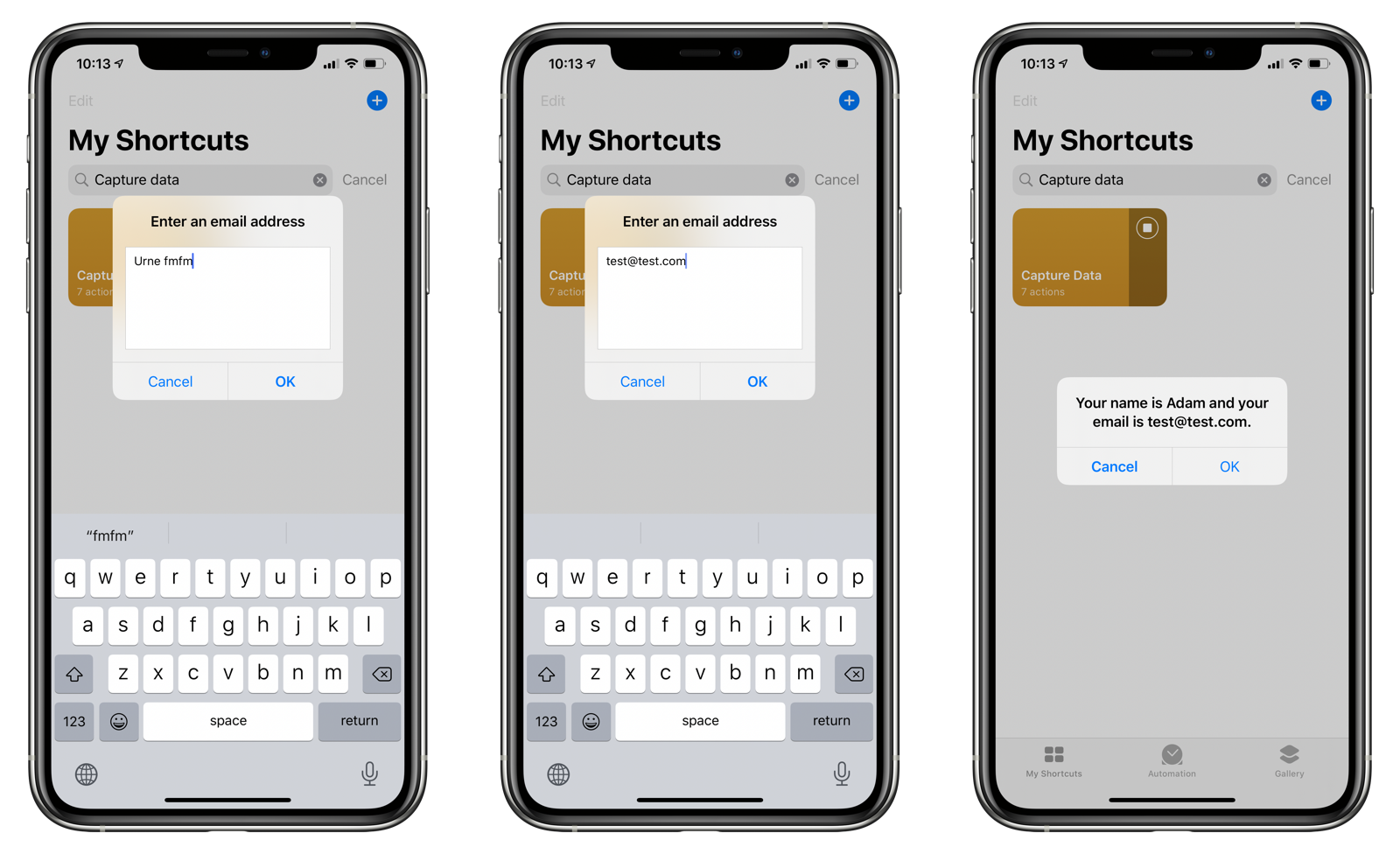 Here are some sample shortcuts that demonstrate RepeatCuts ability to create while loops:

Many of the personal automation triggers in iOS 13, such as time and location, require the user to tap on a button in order to run a shortcut.

I developed Autocuts to work around this design choice. Autocuts automatically runs your shortcuts in the background — based on time, location, and web triggers — as long as you are actively using your device.

Here are some shortcuts that work well with RepeatCuts in this fashion.

For a small one-time purchase, you can unlock several Pro features of RepeatCuts that make running looped shortcuts even better. You can trial these Pro features for seven days.

Going Pro is simple and convenient with Apple Cash or PayPal.

Each RepeatCut has the following fields: 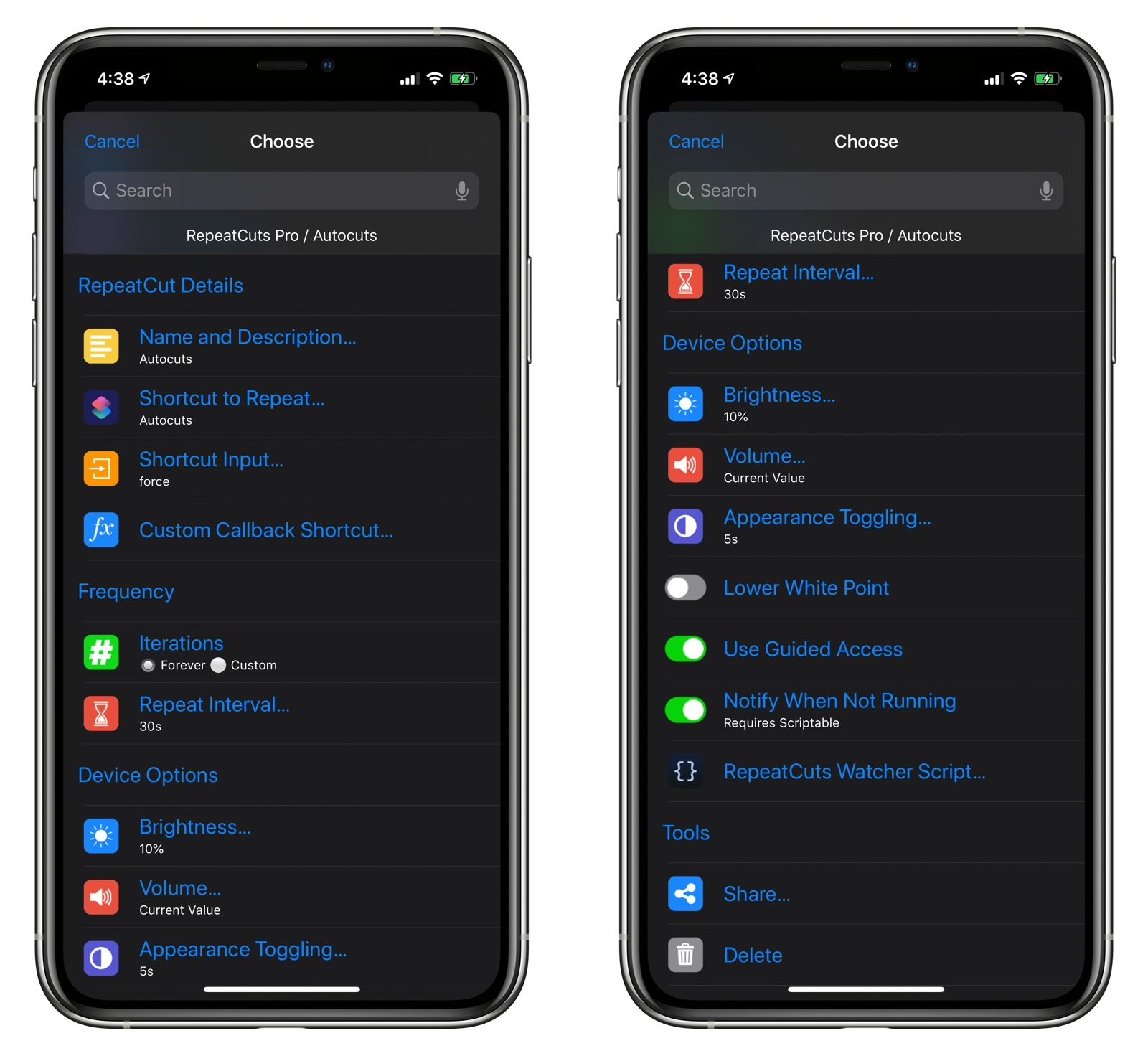 Opening up the RepeatCuts app will display the following menu of commands:

Tap New from the RepeatCuts Home screen to start creating a new RepeatCut. You will be prompted to enter the following things:

After creating a RepeatCut, you may want to provide optional input to the shortcut. Tap Shortcut Input and enter a textual representation of your input that will be sent when the RepeatCut runs.

In the example above, we’re passing the text run to the Location Triggers shortcut, which will instruct Location Triggers to bypass its Home screen, calculate the user’s current position, and automatically run any shortcuts assigned to that location.

Any output from the shortcut will be treated as input in the next iteration of the run loop. This allows you to change the behavior of your shortcut based on the previous run.

A RepeatCut can be set to run indefinitely or a finite number of times. You can also set a delay between each loop iteration. Here’s how to do it:

Note: Shortcuts must be running in the foreground in order for the Wait action to work properly. If you switch to another app, iOS will likely terminate the shortcut due to perceived inactivity. If you plan to run RepeatCuts for long periods of time, consider turning on the Guided Access feature.

Note: If you do not have any RepeatCuts installed, the Library command will be hidden. 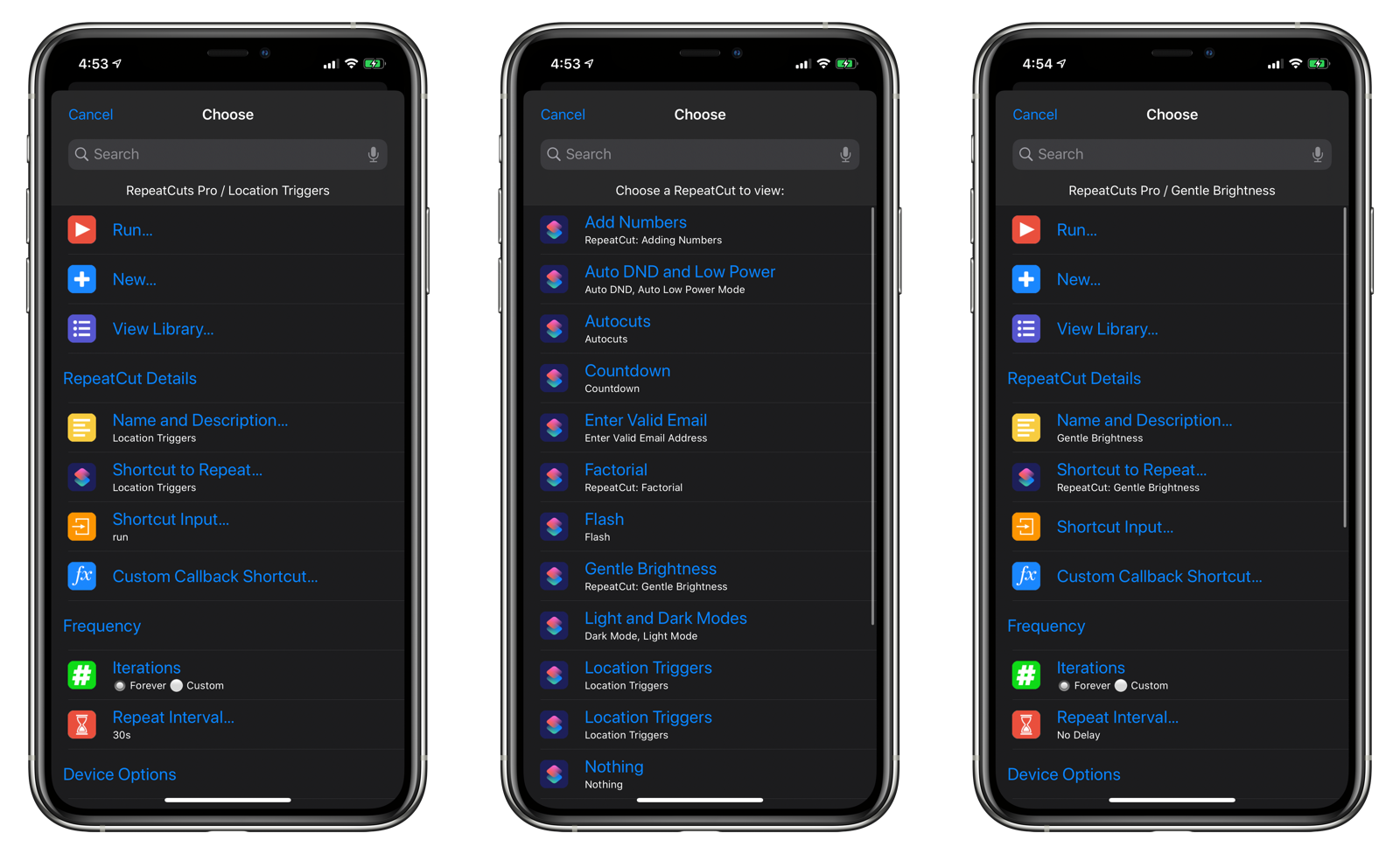 From the Shortcuts Home screen, you can stop a RepeatCut by tapping the square Stop button. If that button is not visible, you can force quit Shortcuts by revealing the app switcher and swiping the Shortcuts away.

RepeatCuts offers several PRO features under a small one-time purchase. You can use these features without restrictions for seven days by activating the RepeatCuts Trial.

I’ve worked really hard to make these complicated and advanced shortcuts such as RepeatCuts and Autocuts. Please support your indie Shortcuts developer by purchasing a PRO license for RepeatCuts.\ \ Thanks in advance!\ \ -adam

You can optionally define a separate shortcut to be called after the shortcut (or shortcuts if Multiple Shortcuts has been enabled) has run in RepeatCuts. Its input will be the output of the last shortcut run. If it receives the ❌❌❌ string, it will return as output the last shortcut’s output.

You can chain together multiple shortcuts to run in a single RepeatCut. This is useful if you have a set of independent shortcuts that you always want to run together.

For instance, say you have a series of shortcuts that control your HomeKit devices. You can have them all run at once repeatedly instead of creating one giant shortcut that does it all.

NOTE: There’s a bug in iOS when selecting multiple items from a list. After choosing your items, tap the Cancel button in the search field before tapping Done. If Shortcuts appears to hang, you can close the shortcut and re-open it. Your changes in RepeatCuts should have been saved.

When you run the RepeatCut, the shortcuts will be run sequentially starting with the first to the last.

Note that if any of the shortcuts returns the ❌❌❌ control string, RepeatCuts will terminate. So, if you plan to chain together a bunch of shortcuts, make sure none of them return ❌❌❌.

Turning on Guided Access is an excellent way to run your shortcuts automatically without fear that the device will accidentally turn off or have iOS prematurely terminate the Shortcuts application. 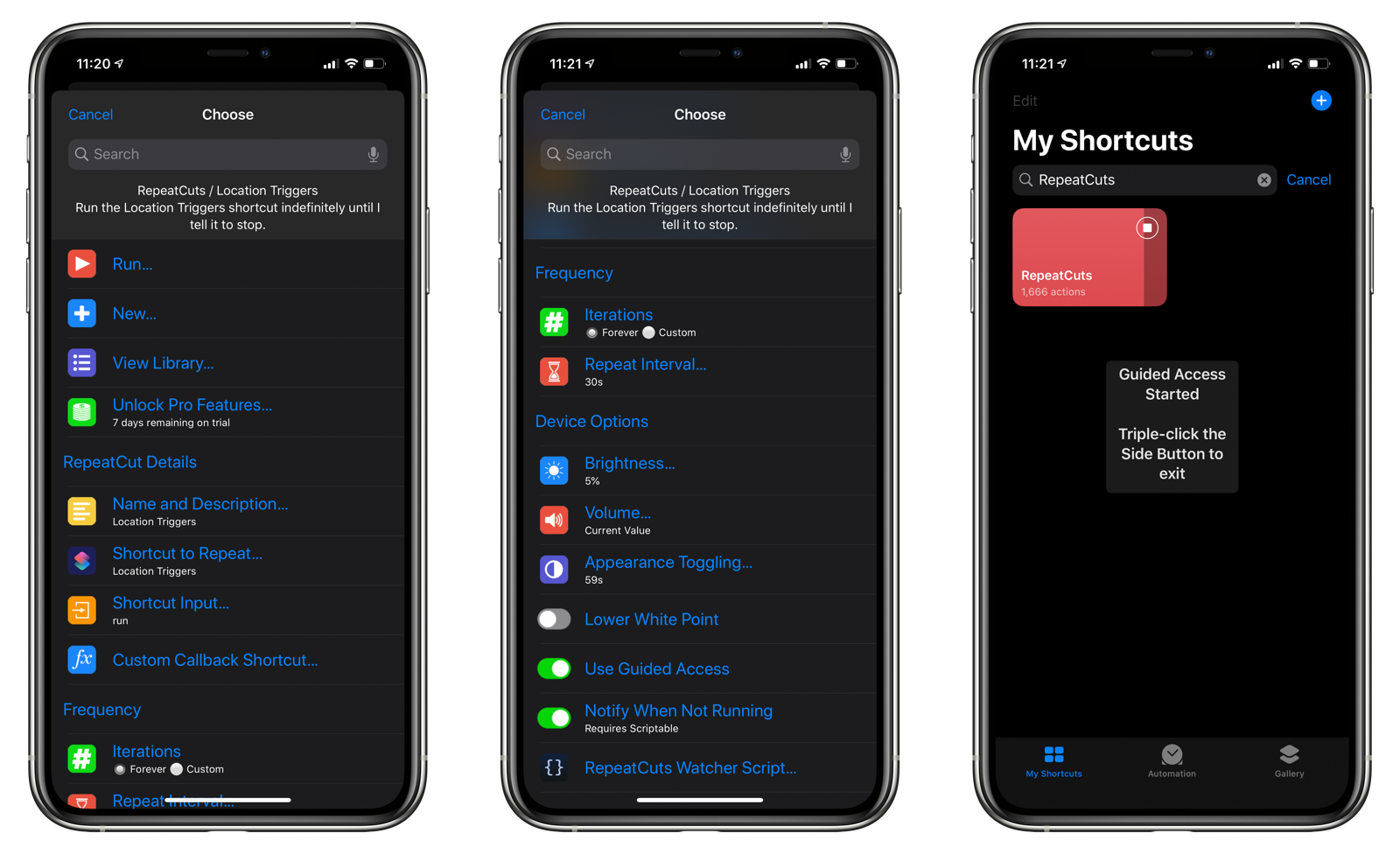 This is great if you are going for a run and want to run your shortcuts automatically while listening to a podcast or music in the background. Guided Access with Touch disabled will ensure that accidental taps will not turn off RepeatCuts.

TIP: If you have a Face ID or Touch ID capable device, you can configure Guided Access to be unlocked with a double-press of the Side button.

There are some limitations when running RepeatCuts under Guided Access:

If you have Scriptable installed, you can be notified when RepeatCuts stops running for whatever reason.

The RepeatCuts Watcher is a Scriptable script that adds several reminders in the future to run RepeatCuts. They are constantly being added and removed while RepeatCuts is running its loop, meaning the reminders are always being set sometime in the future.

If RepeatCuts gets stopped for an unknown reason, those reminders in the future will be displayed with a link to re-open RepeatCuts. You can then tap Run to restart RepeatCuts with the currently selected RepeatCut.

To install and configure RepeatCuts Watcher, do the following:

NOTE: If you do not have Scriptable installed, running the RepeatCut will result in an error.

It would be great if shortcuts could run automatically in the background without supervision and it would be great for all of this to be done while the device screen is turned off. Unfortunately, that’s not the case with iOS at the moment, so we have to resort to clever workarounds.

Appearance Toggle periodically switches between Light and Dark modes on your iOS device while your RepeatCuts are running. Combined with the ability to lower the brightness and set the white point, these features work to minimize image retention and screen burn-in when using RepeatCuts for extended periods of time.

Note: RepeatCuts is not responsible for any screen burn-in or image retention effects you may encounter.

Note: If you RepeatCut Repeat Interval is greater than your Appearance Toggle interval, your device appearance will change every time your shortcut runs again.

Exiting Out of Loops

If you are creating a shortcut that’s to be used as a While loop, you’ll need a way to exit out of a RepeatCuts loop. Your shortcut accomplishes this by returning the ❌❌❌ string in your Exit Shortcut action. 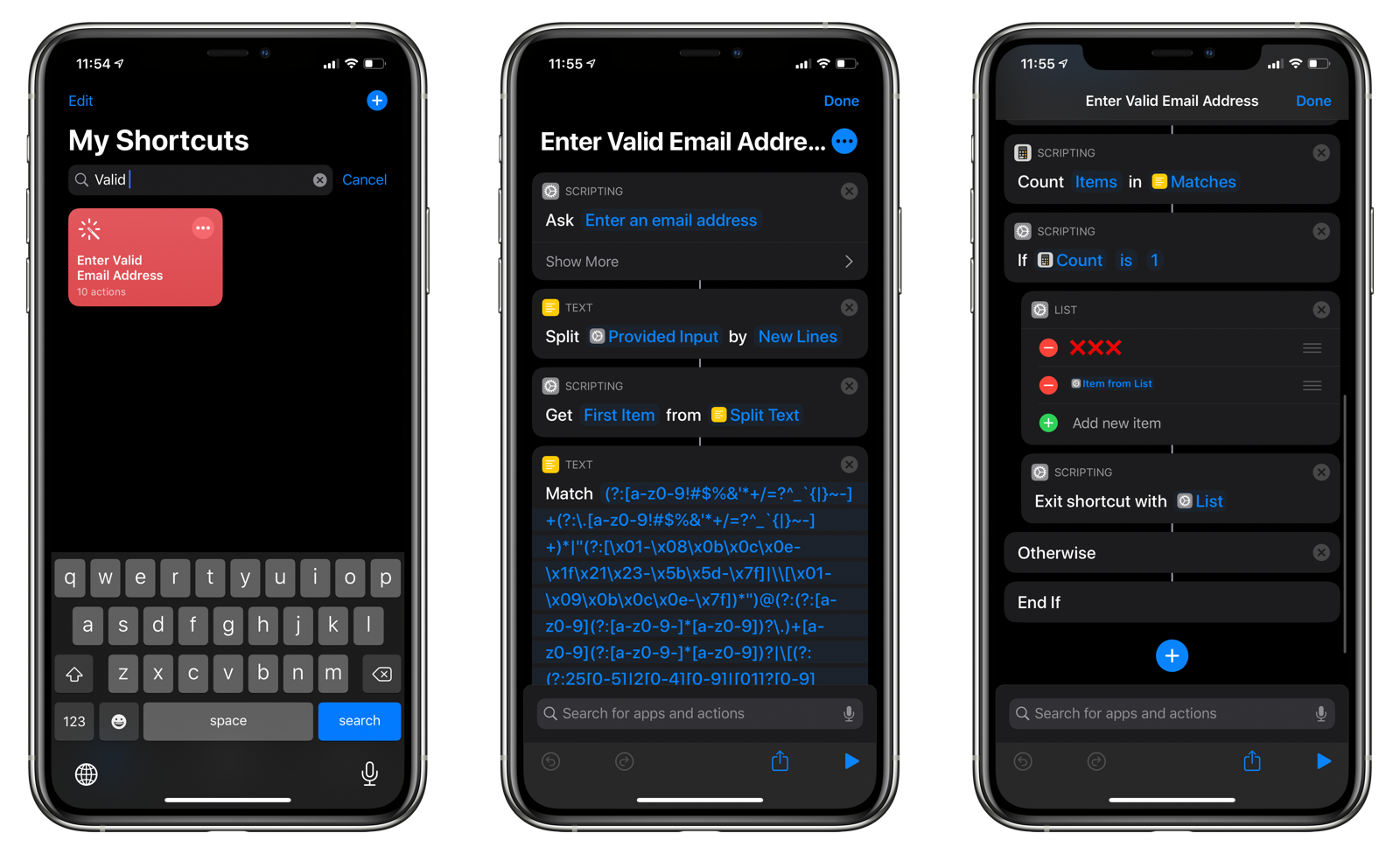 If you want to return additional information back to the calling shortcut, you can return a list of items, with the first item being the ❌❌❌ control string:

If you do not return the ❌❌❌ string and if the RepeatCut is set to run forever, you will have to force quit the shortcut or Shortcuts app in order for the shortcut to stop running, as you have effectively created a infinite loop:

Programmatically Calling RepeatCuts From Other Shortcuts

RepeatCuts provides the ability for your shortcuts to have while loops. 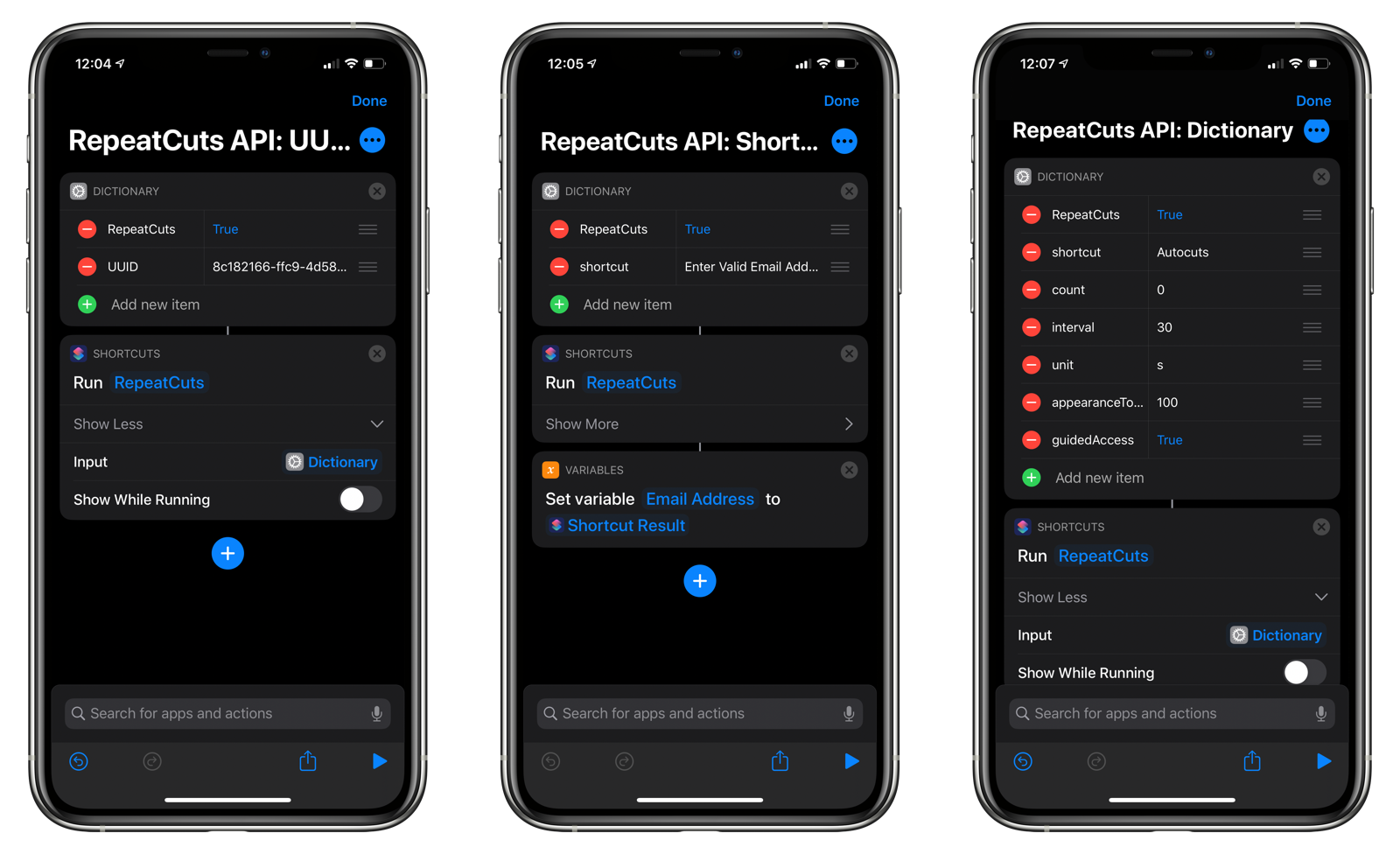 Supply the call to Run Shortcut with a dictionary containing the shortcut you wish to call to RepeatCuts.

If you know the UUID of a RepeatCut, you can specify it in the dictionary to Run Shortcut:

You can also use the shortcuts://run-shortcut URL scheme to run RepeatCuts from other applications. For instance:

Will open RepeatCuts in the Shortcuts application.

Will cause RepeatCuts to automatically run the RepeatCut with the UUID of 95e918f6-3d32-420a-961a-73b90ded78cd, which is the same as calling the Run Shortcut action with the following dictionary:

RepeatCuts is fully localized in English and has been auto-translated in over 26 different languages on iOS. If you would like to improve on of the translations, visit RepeatCuts’ localization page on Github and submit a pull request.

Permission is hereby granted, free of charge, to any person obtaining a copy of this software and associated documentation files (the “Software”), to deal in the Software without restriction, including without limitation the rights to use, copy, modify, merge, publish, distribute, sublicense, and/or sell copies of the Software, and to permit persons to whom the Software is furnished to do so, subject to the following conditions:

The above copyright notice and this permission notice shall be included in all copies or substantial portions of the Software.

THE SOFTWARE IS PROVIDED “AS IS”, WITHOUT WARRANTY OF ANY KIND, EXPRESS OR IMPLIED, INCLUDING BUT NOT LIMITED TO THE WARRANTIES OF MERCHANTABILITY, FITNESS FOR A PARTICULAR PURPOSE AND NONINFRINGEMENT. IN NO EVENT SHALL THE AUTHORS OR COPYRIGHT HOLDERS BE LIABLE FOR ANY CLAIM, DAMAGES OR OTHER LIABILITY, WHETHER IN AN ACTION OF CONTRACT, TORT OR OTHERWISE, ARISING FROM, OUT OF OR IN CONNECTION WITH THE SOFTWARE OR THE USE OR OTHER DEALINGS IN THE SOFTWARE.