The following menu is presented by ActionCuts at launch:

ActionCuts works by looking for specially-formatted comments in a shortcut. It replaces these comments with the complete contents of other shortcuts or action blocks from the ActionCuts Library.

Each comment must contain a single line of text in one of two formats:

where XYZ is the name of the shortcut or the action block to embed. Consider the screenshot below: 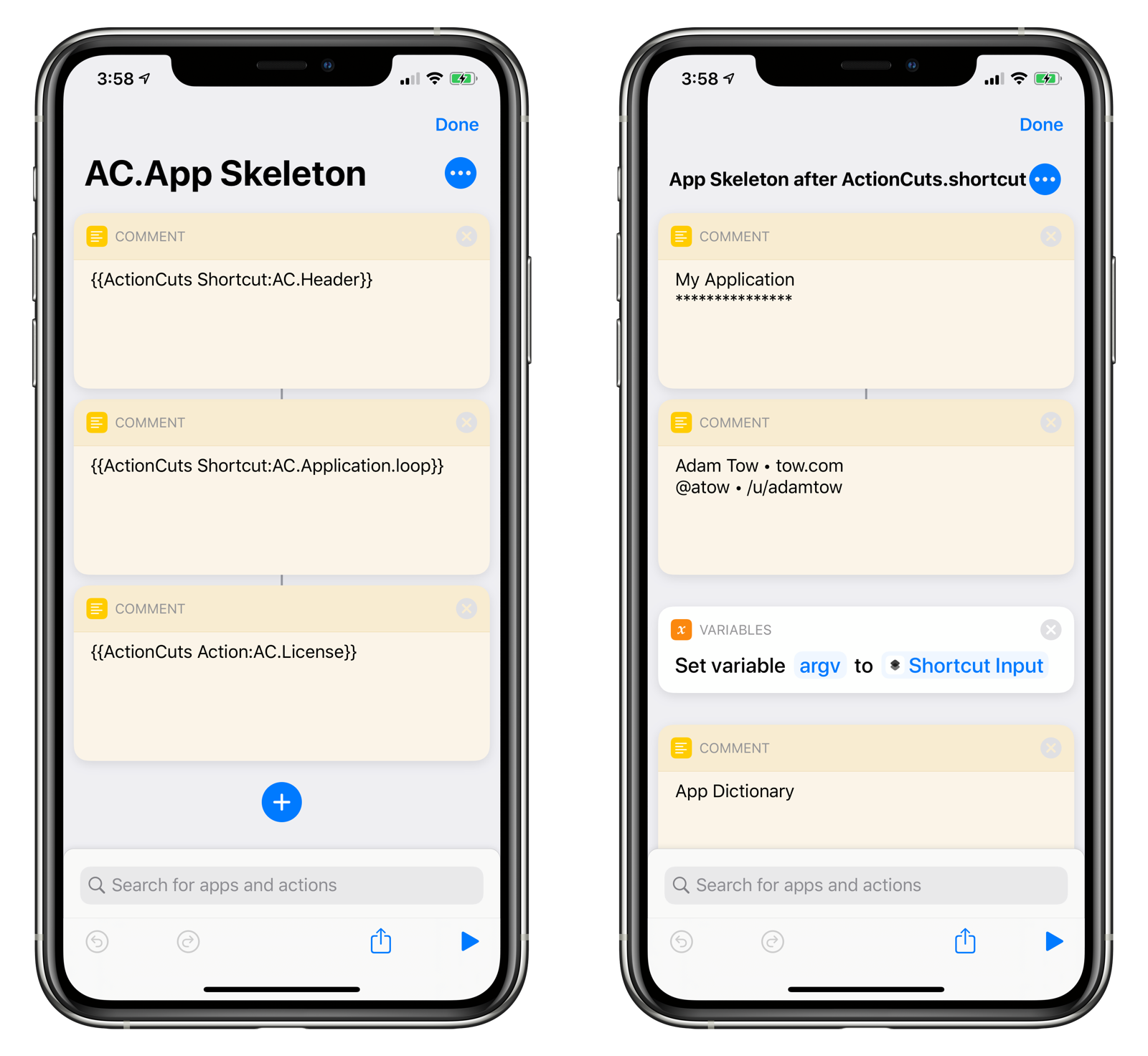 The shortcut on the left has three ActionCuts Embed Comments that specify the following shortcuts or actions are to be inserted when processed by ActionCuts:

Follow these steps to embed shortcuts and action blocks into a shortcut: 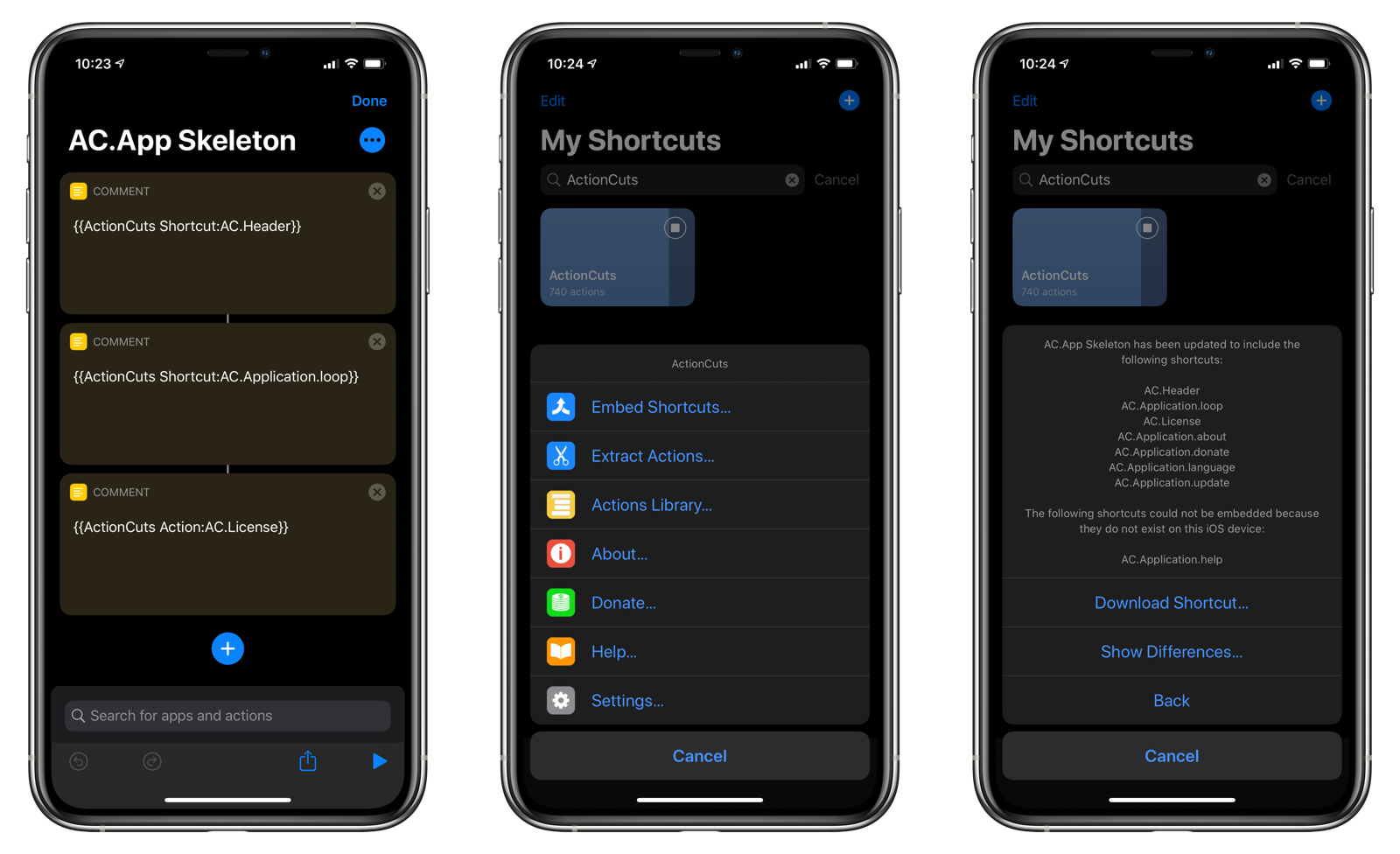 ActionCuts will now go through the target shortcut and process any ActionCuts Embed Comments. 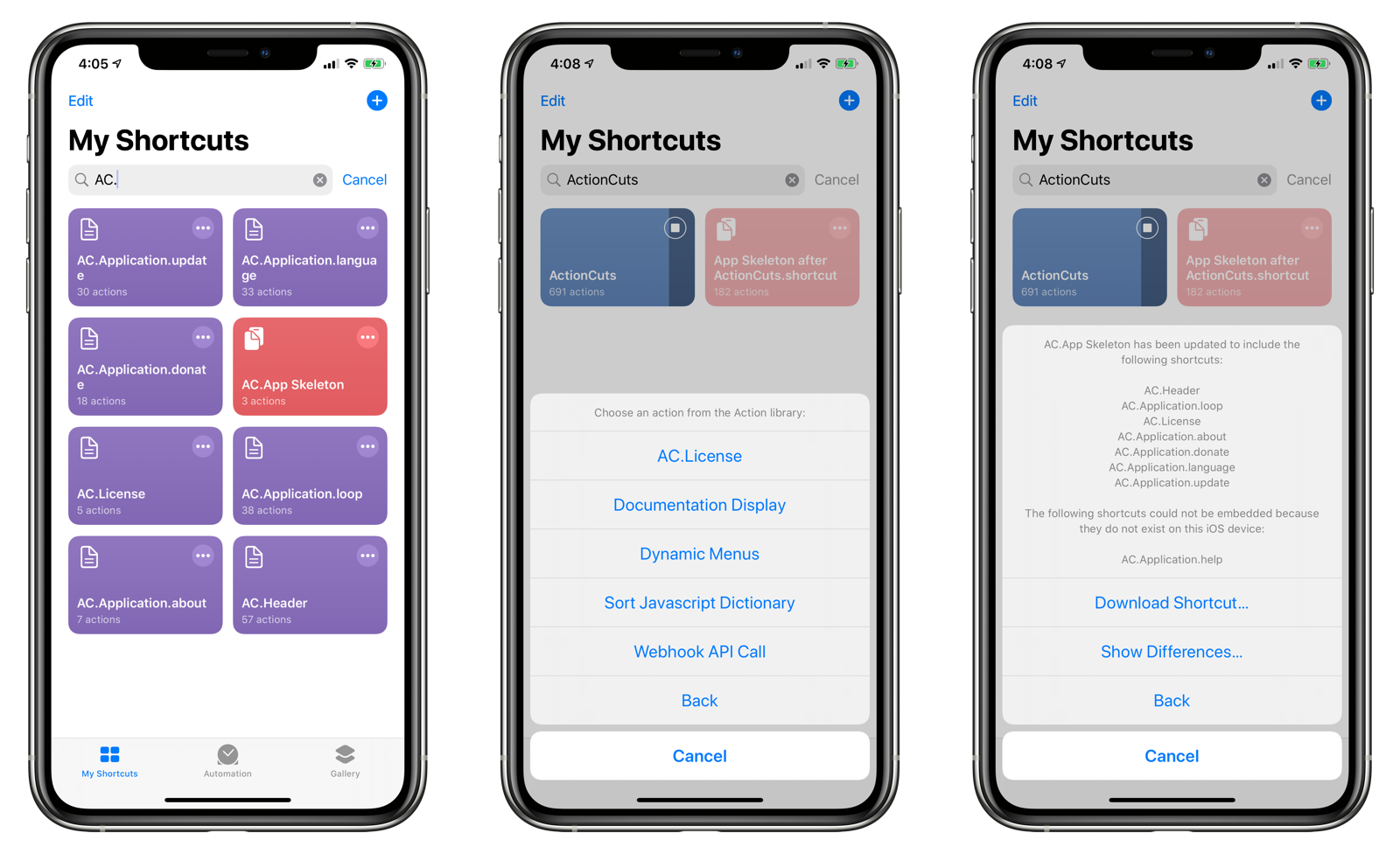 In the example given above, ActionCuts will look for two shortcuts with the name AC.Header and AC.Application.loop. It will also look for an action block called AC.License in the ActionCuts Action Block Library. If it finds them on the iOS device, it will insert them exactly where the comment blocks are located.

ActionCuts recursively processes the shortcut, meaning if a shortcut or an action block being inserted contains ActionCuts Embed Comments, those comments will be processed as well. So, in addition to the two shortcuts and action listed above, these additional shortcuts were inserted into the target shortcut:

You can choose to view the differences made by ActionCuts after processing a shortcut and replacing any ActionCuts Embed Comments. ActionCuts uses a simple diff algorithm to show the changes. Text in red represent deletions and text in green signify additions to the shortcut. 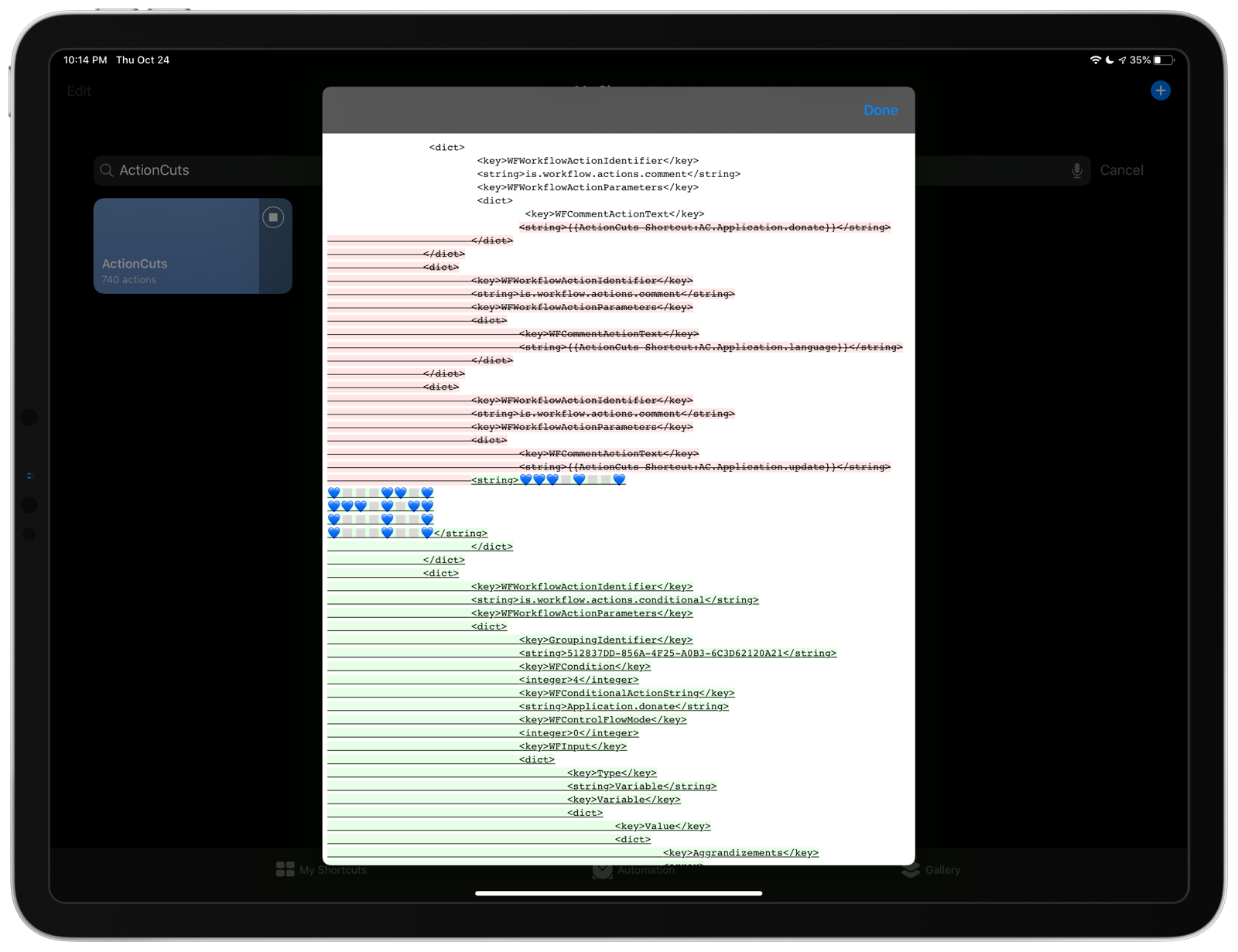 Imagine you are writing a super long and highly complex shortcut. You come up with a great set of actions that you want to re-use in your other shortcuts, but how do you get it out of the shortcut? Traditionally, you have two options, neither of which are ideal:

With ActionCuts, you only need to:

What used to take minutes or even hours now takes seconds! With ActionCuts, you can extract entire blocks of actions and place them into a new shortcut or into the ActionCuts Action Blocks Library.

In your shortcut, surround the actions you want to extract with two comments:

… the actions to extract …

where XYZ is the name of your action block. Note the ending comment has a \/ character preceeding the word ActionCuts.

In the action blocks that you save or convert into shorcuts, references to any Magic Variables defined outside of the ActionCuts Extract Comments will be broken and labeled in red. 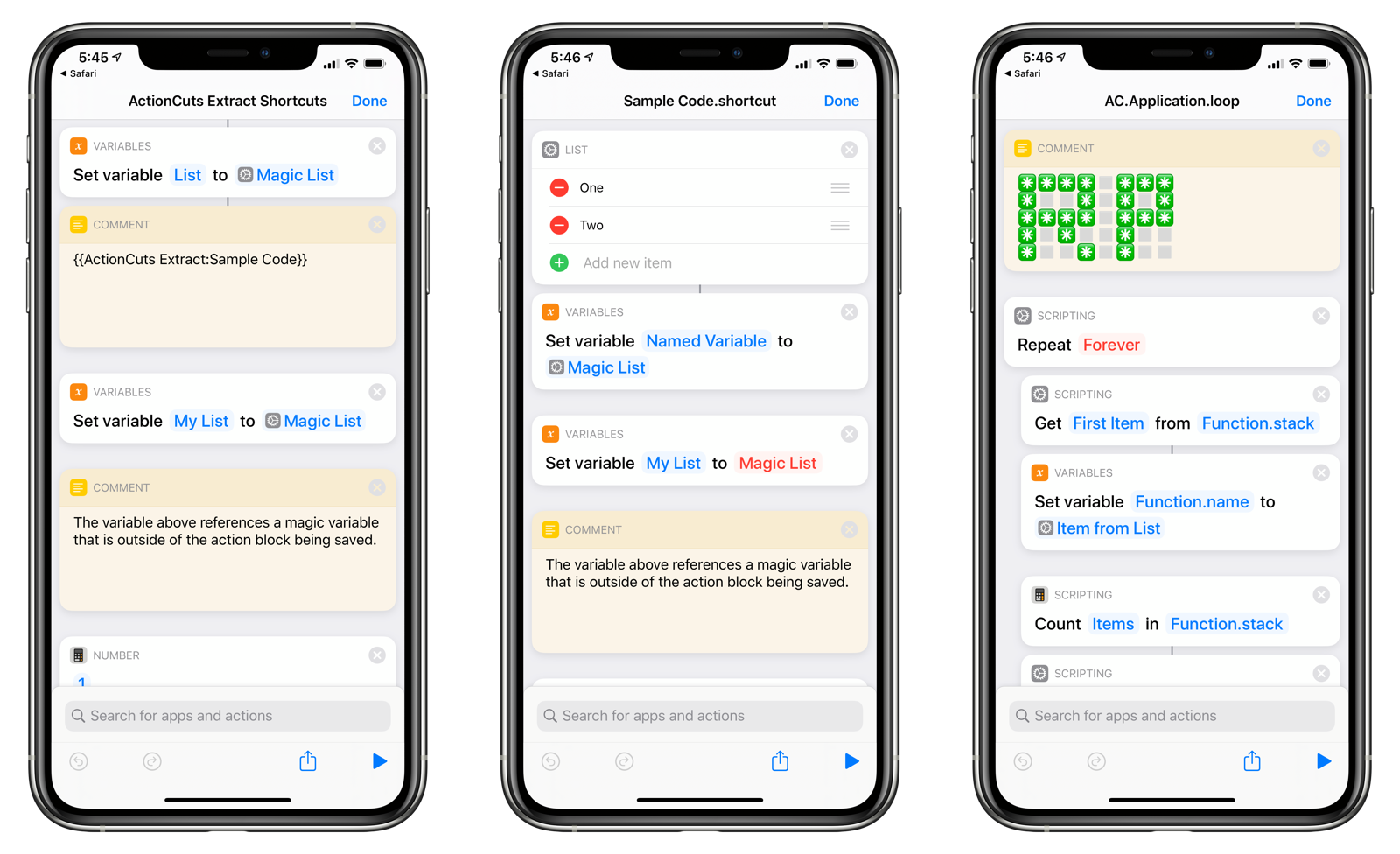 Named variables, on the other hand, are fine — those that are created using the Set Variable action — even though they show up as red. As long as the named variables are defined somewhere else in the target shortcut, the references will be re-associated. 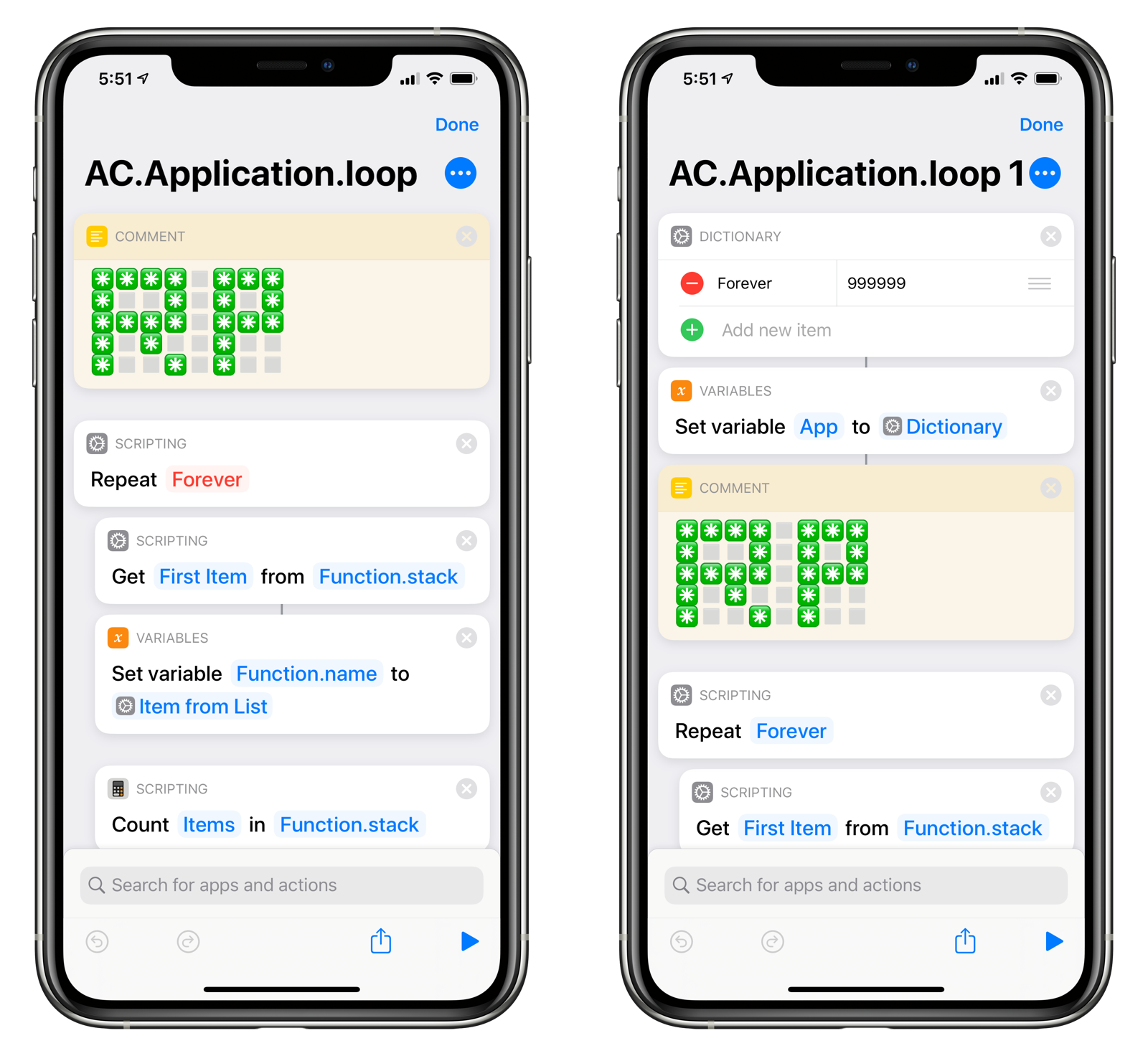 It is very important that the ActionCuts Extract Comments are placed correctly around the actions you wish to extract. Consider the following shortcut: 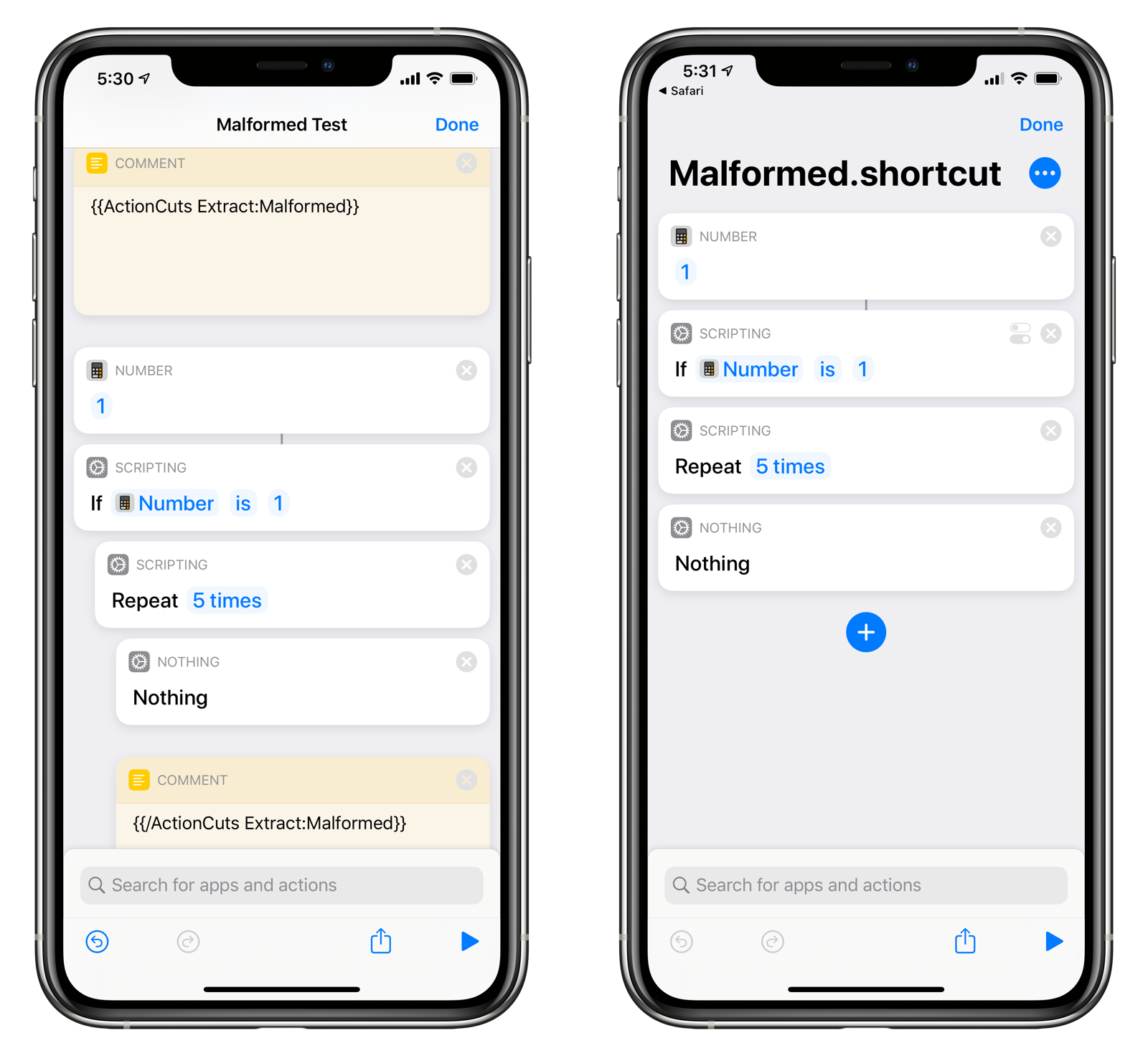 On the left screenshot, the ending Extract Comment was placed inside the Repeat action, which itself was inside an If action. The comment should have been placed right outside the End If action.

Placing the starting and end Extract Comments in the wrong place can result in unexpected behavior when running your shortcuts.

When you embed shortcuts and extract action blocks, ActioCuts will give you the opportunity to create a new shortcut. Choosing this option will upload the shortcut to iCloud Drive and provide you a link to the new shortcut. 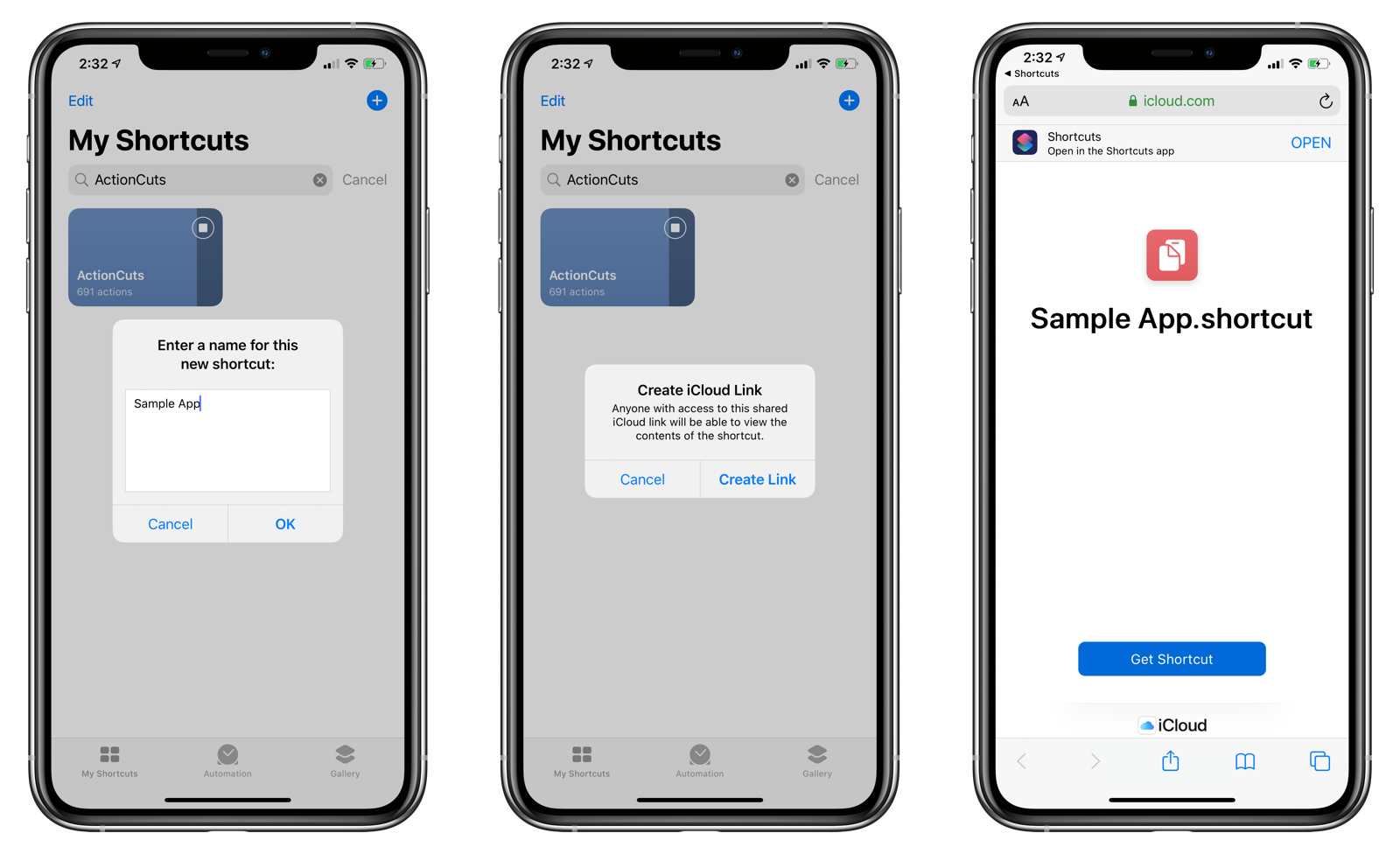 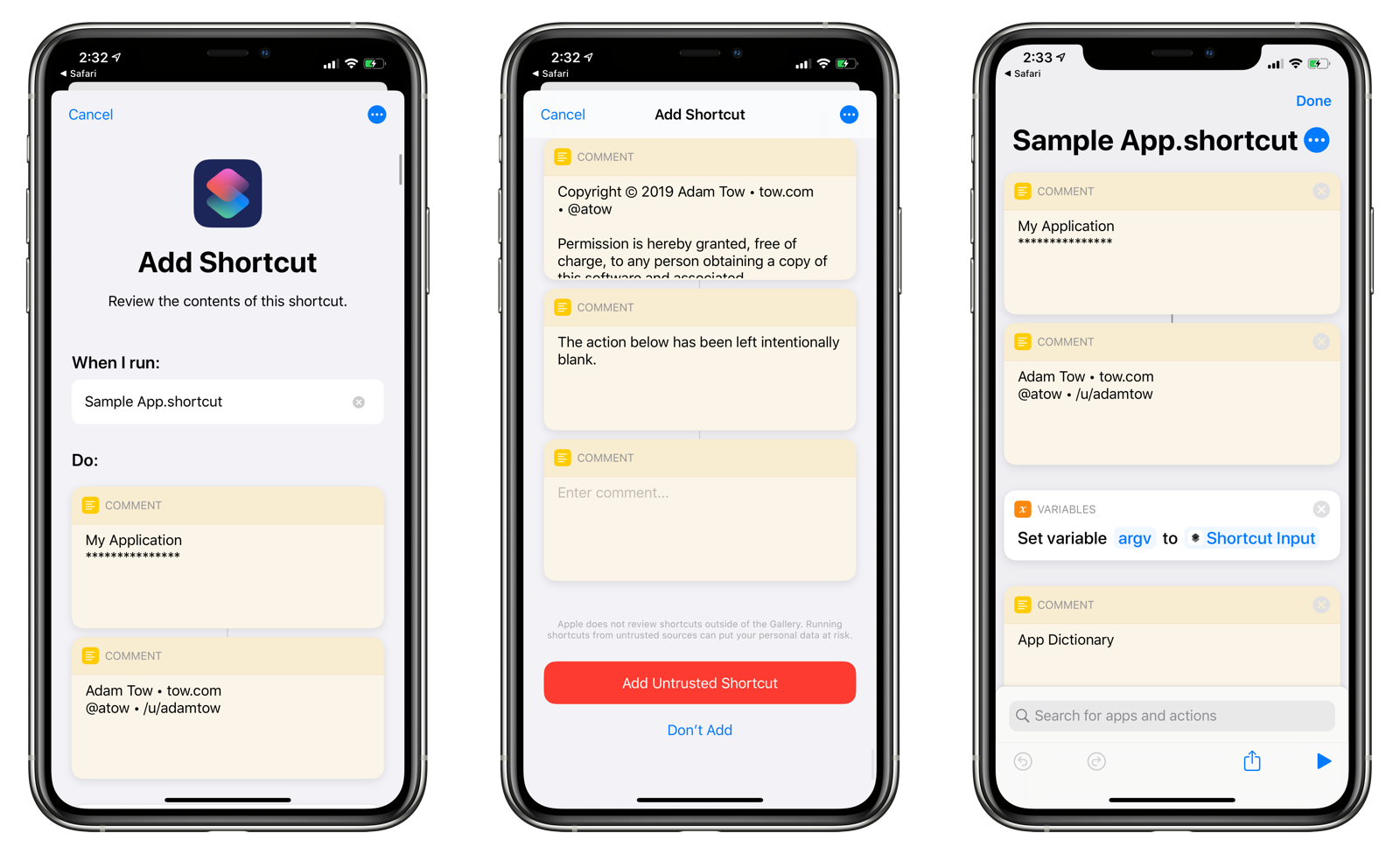 NOTE: Shortcuts downloaded to your device via ActionCuts have the string .shortcut appended to the end of the filename. This is unavoidable at the moment, but you can always update the name of the shortcut after downloading.

ActionCuts is fully localized for the English language, and it has been auto-translated into many other languages. If you would like to contribute and a more accurate localization file for ActionCuts, please visit ActionCuts’ localization page here.

Permission is hereby granted, free of charge, to any person obtaining a copy of this software and associated documentation files (the “Software”), to deal in the Software without restriction, including without limitation the rights to use, copy, modify, merge, publish, distribute, sublicense, and/or sell copies of the Software, and to permit persons to whom the Software is furnished to do so, subject to the following conditions:

The above copyright notice and this permission notice shall be included in all copies or substantial portions of the Software.

THE SOFTWARE IS PROVIDED “AS IS”, WITHOUT WARRANTY OF ANY KIND, EXPRESS OR IMPLIED, INCLUDING BUT NOT LIMITED TO THE WARRANTIES OF MERCHANTABILITY, FITNESS FOR A PARTICULAR PURPOSE AND NONINFRINGEMENT. IN NO EVENT SHALL THE AUTHORS OR COPYRIGHT HOLDERS BE LIABLE FOR ANY CLAIM, DAMAGES OR OTHER LIABILITY, WHETHER IN AN ACTION OF CONTRACT, TORT OR OTHERWISE, ARISING FROM, OUT OF OR IN CONNECTION WITH THE SOFTWARE OR THE USE OR OTHER DEALINGS IN THE SOFTWARE.